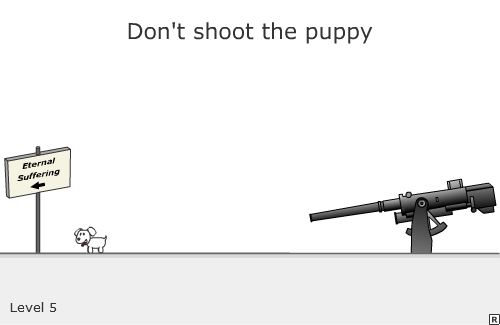 Viewed over 40,000,000 times, this game asked the question "how hard is it to do nothing?". When so many other Flash games needed lightning-quick reflexes and complex problem solving, Don't Shoot the Puppy looked like it needed those things too, but if you did anything you lost.
Thousands of comments proved how hard it was for people to think of inaction as a strategy, and still more fell for the later levels (which somehow tricked people when all the ones before were solved without touching anything). From fake popup ads to fake blank screens to fake obstacles, players convinced themselves that this time the puppy needed help, but what we didn't realize was how many people could not just sit and watch for 10 minutes. Even though we sit through movies or TV for hours on end, Flash games are so ADD-friendly that many people lost patience and knowingly killed the dog.

Uploaded by BlueMaxima-Flash on October 31, 2020